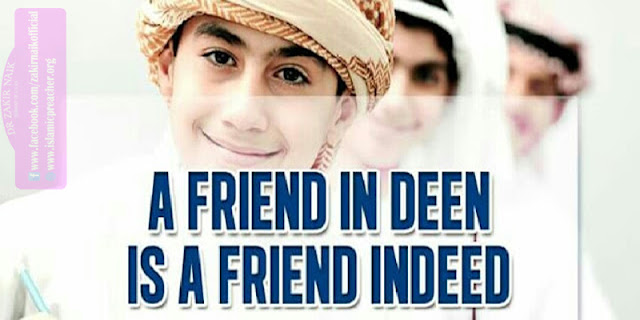 Did you read the caption of this article? Well, read it again, carefully this time. That's right, it's not a misprint. Really a friend in Deen is a friend indeed. Let us examine why. Whether we like it or not every moment of our lives we are interacting with people. Our occupation, studies, and activities provide us with opportunities to associate with certain groups of people more often than others.

This company that we keep definitely plays an important role in the manner we behave. Just to be with it, we tend to do what those around us are doing. A student is sometimes forced to behave in a certain manner just to claim his place amongst his peers. How often have people have to sacrifice principles of Deen to secure this kind of friendship.

How important is it for a person to be guarded about the kind of people he associates with? In a Hadith reported by Abu Hurayra (Radhiallaahu anhu), Rasulullah (Sallallaahu alayhi Wasallam) is reported to have said, "A person is upon the way of life of his close companion so each of you should be careful whom you take as a close friend."

The effect that the kind of company you keep has on you has further been illustrated by the beautiful words of Nabi (Sallallaahu alayhi Wasallam) where he has mentioned in a Hadith found both in Bukhari and Muslim.

"The example of a pious companion and an evil companion is like that of a musk seller and a person blowing a furnace. As for the musk seller, he may give you some or you may purchase some from him or you would obtain a beautiful fragrance from him. As for the person blowing the furnace, he may either burn your clothing or you would obtain an unpleasant odor from him."

While we ensure that we only join good company, let us for a moment think, what kind of friend have we been to our colleagues at work, classmates at school and neighbors at home? Have we been encouraging them to participate in activities that are un-Islamic?

Am I responsible for the first puff of cigarette that he took, the first taste of drugs, the first sip of alcohol, the first attempt at gambling, the first pornographic movie or magazine which has passed through his hands?? If our answer to any of the above is in the affirmative then let us ponder over the verse in Surah Furqaan (25:26-29) wherein Allah Ta'ala says that the wrongdoer would bite his hands on the day of Qiyaamat saying, "Would that I had not taken such a person as a friend, he led me astray from the message of Allah after it came to me."

Who then is a sincere friend? One who sticks with you through thick and thin, through prosperity and adversity, above all the one who is concerned about your welfare both in this world and the hereafter. Allah Ta'ala says in Surah Zukhruff (43:67)

"On that day close friends would be enemies of each other except the God-conscious ones."