WHAT IS HAPPENING TO THE MUSLIMS OF PALESTINE HURTS EVERY MUSLIM 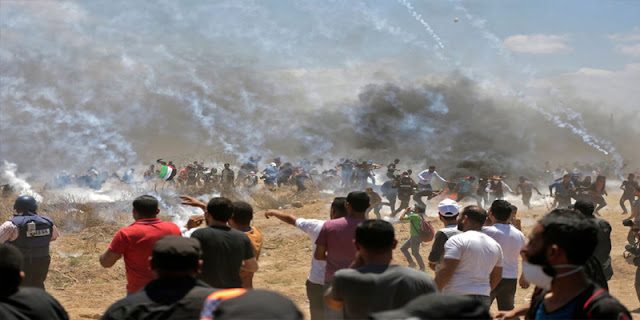 Undoubtedly what is happening to the Muslims in the Holy Land of hardship, torture, expulsion, killing and harm is a matter which causes sorrow to every Muslim, and indeed to every non-Muslim who is reasonable, fair-minded and compassionate, when they see the blatant persecution inflicted upon innocent people, with the intention of driving them out of their homes so that the enemy can take their place, which is an enemy that possesses the most advanced weapons, with which they attack unarmed people who are deprived of the means of defending themselves.

This Muslim people has endured for more than fifty years, facing unending Zionist arrogance and aggression, which pays no heed to human dignity or any covenant or treaty, or any law, except that to which their own whims and desires make them inclined and in which their evil rabbis and warlords encourage them.

The outcome of that is well known to Muslims as well as Jews, which is that the consequences will be in favour of the pious and the party of God will be the victors. The wrongdoer will never enjoy security, stability and prosperity, rather he will be faced with fear, anxiety, grief and shame, until the day comes when the Muslims come back to their religion and are governed by the sharee’ah of their Lord, then they will meet the Jews in battle, where the two sides will face one another, and victory will go to the people of faith.

Al-Bukhaari (2926) and Muslim (2922) narrated from Abu Hurayrah that the Messenger of Allah SAWS (peace and blessings of Allah be upon him) said: “The Hour will not begin until the Muslims fight the Jews and kill them, until a Jew will be hiding behind a rock or a tree, and the rock or tree will say, ‘O Muslim, O slave of Allah, here is a Jew behind me, come and kill him!’ except for the box-thorn (al-gharqad), for it is one of the trees of the Jews.”
We ask Allah to hasten the Muslims’ return to their religion and to grant them the means of victory. May He grant us the joy of seeing His religion prevail and His enemies humiliated, and may He raise the status of those who are persecuted, tortured or killed for His sake.