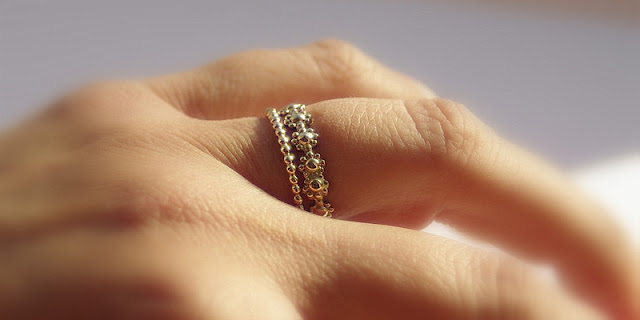 With regard to men wearing gold, whether it is a ring or anything else, it is not permissible under any circumstances, because the Prophet (peace and blessings of Allah be upon him) forbade gold for the males of this ummah. He saw a man wearing a ring of gold and he (peace and blessings of Allah be upon him) took if from his hand and said, “Would any one of you take a coal from the fire and hold it in his hand?” (Narrated by Muslim, al-Libaas wa’l-Zeenah, 3897). So it is not permissible for the Muslim male to wear a gold ring. But with regard to rings of silver or any other kind of metal, it is permissible for men to wear them even if they are precious metals.

With regard to the wedding ring, which is worn on the occasion of marriage, this is not one of the customs of the Muslims. If it is believed that it generates love between the spouses, and that taking it off and not wearing it will have an effect on the marital relationship, then this is regarded as a form of shirk and is a kind of jaahili belief. Based on the above, it is not permissible to wear a wedding ring under any circumstances.

Firstly, because it is an imitation of those who are no good; it is a custom that has come to the Muslims from the non-Muslims.

Secondly, if that is accompanied by the belief that it has an effect on the marital relationship, then this is a kind of shirk. Laa hawla wa laa quwwata illa Billaah (there is no power and no strength except with Allah).

Shaykh Ibn ‘Uthaymeen was asked about the ruling on wearing engagement rings. He said: The engagement ring is a kind of ring, and there is nothing wrong with rings in principle, unless that is accompanied by some belief, as some people do when the man writes his name on the ring that he gives to his fiancée, and she writes her name on the ring that she gives to him, believing that this will create strong bonds between the couple. In this case, this ring is haraam, because it is an attachment to something for which there is no basis in Islam and which makes no sense. Similarly, with regard to the engagement ring, it is not permissible to the man to put it on his fiancée’s hand, because she is not his wife yet and she is still a stranger (non-mahram) to him, because she is not his wife until after the marriage contract has been done.