RULING ON PUTTING FLOWERS AND PLANTS IN THE BATHROOM 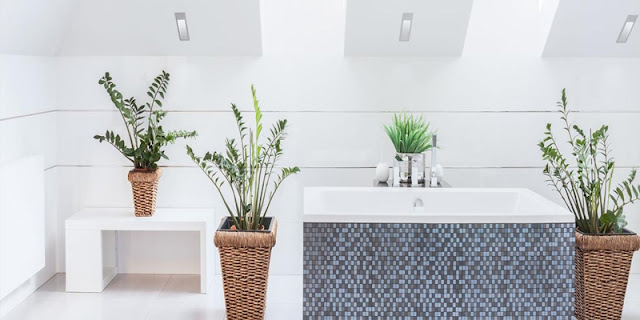 It is not wrong to put flowers, plants ar tree seedlings in bathroom as long as there is no extravagance or waste involved in that. If such is the case then it is blameworthy.

Allaah says (interpretation of the meaning): “And let not your hand be tied (like a miser) to your neck, nor stretch it forth to its utmost reach (like a spendthrift), so that you become blameworthy and in severe poverty”

This is a prohibition on both miserliness and extravagance.

And Allaah says (interpretation of the meaning):

“And give to the kinsman his due and to the Miskeen (poor) and to the wayfarer. But spend not wastefully (your wealth) in the manner of a spendthrift.

27. Verily, the spendthrifts are brothers of the Shayaateen (devils), and the Shaytaan (Devil‑Satan) is ever ungrateful to his Lord” [al-Isra’ 17:26, 27]

Allaah says: “Verily, the spendthrifts are brothers of the Shayaateen (devils).”

And it was said that extravagance (israaf) is not just in terms of money, rather it applies to everything that is done inappropriately. Do you not see that Allaah described the people of Loot as being extravagant because they put their seed in a place that is not for tilling. Allaah says (interpretation of the meaning):

“Verily, you practise your lusts on men instead of women. Nay, but you are a people transgressing beyond bounds [musrifoon] (by committing great sins)”

And He described Pharaoh as being extravagant, as He says (interpretation of the meaning):

“verily, he was arrogant and was of the Musrifoon (those who transgress beyond bound in spending and other things and commit great sins)”

From these evidences we come to know that extravagance is of two kinds: Haraam and Makhroo.

It is haram when it includes wasting money etc on things beyond the norm.

Makhroo extravagance means wasting the useful thing for no purpose. Examples of this can be wastage of water, taking it out for drinking but not putting it to any use.

An example of extravagance include buying something decorative for too much money because adornment is allowed but paying or using a lot of money for it is blameworthy.

An example of waste is buying something that has no value and will not last or is not worth that amount. “Allaah hates three things for you: gossip, wasting money and asking too much.” Narrated by al-Bukhaari (1477) and Muslim (593).

A muslim must be aware of both of these things and realize that wealth is an asset and a blessing given by Allah taala and must be guarded and used accordingly. Allah tala will ask us about these things on the day of Judgement.

“From where did he earn it and on what did he spend it?” as it says in Sunan al-Tirmidhi(2416) from the Prophet (peace and blessings of Allaah be upon him).

We ask Allaah to keep us safe by His bounty and grace.