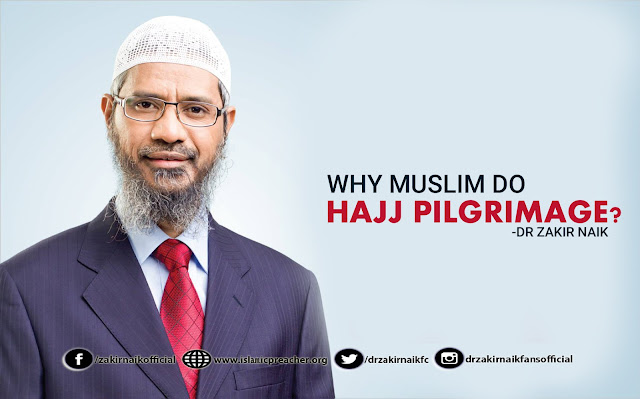 Q. Dr. Naik, I am Advocate Madhav Phadhke – you said in your speech that God is alive, imageless and formless, as stated in Hinduism. Then why you Muslims doing Haj Pilgrim – they worship Holy shrine, as the Hindus they worship?

A. (Dr. Zakir): That is a very good question the brother has posed – that if Almighty God has got no image in Islam – Allah (swt) no form…then why do the Muslims – they worship the Holy Shrine…referring to the Kabah – in Haj Pilgrimage? Brother, it is a misconception – No Muslim ever worships the Kaba – It is a misconception among the Non-Muslims, that we Muslims, we worship the Kabah. No Muslim worships the Kabah – we only worship Allah (swt), Who we cannot see in this world. What we do is, the Kabah is the Qibla – Qibla in Arabic means ‘The direction.’ Kabah is the Qibla, because we Muslims – We believe in unity, always unity. For example, if we want to pray to Almighty God… Allah (swt) – If we have to offer Salaah, some may say… ‘Let us face the North ; some may say…‘Let us face South’ ; some may say…‘East’ ; some say…‘West’. Where do we face? We believe in unity – So for unity, all the Muslims throughout the world, they are asked to face in the direction of the Qibla, that…is the Kabah – it is our direction – We do not worship it. And the first people who drew the world map, were the Muslims – and when the Muslims drew the world map, they drew with the South pole on top, and North pole down – and Kabah was in the center. The Westerners came and they turned the map upside down – North pole on top, South pole down. Alhamdulillah, yet the Kabah is in the center – Mecca is in the center.

Caliph of Islam, Hazrat Umar, may Allah be pleased with him – he made it clear for eternity, that no Muslim ever worships the black stone – it can neither benefits us, neither can it harm us. And the best example is that, during the time of the Prophet – the Sahabas… the companions of the Prophet, they even stood on the Kabah, and gave the Adhan – Adhan is the call for prayers. People stood on the Kabah, and gave the Adhan. I am asking you…‘Which idol worshipper, will ever stand on the idol he worships.’So these are sufficient proofs, that no Muslim ever worships the Kabah. Kabah is the Qibla – and we worship only Allah (swt), Who we cannot see with the eyes. Hope that answers the question.