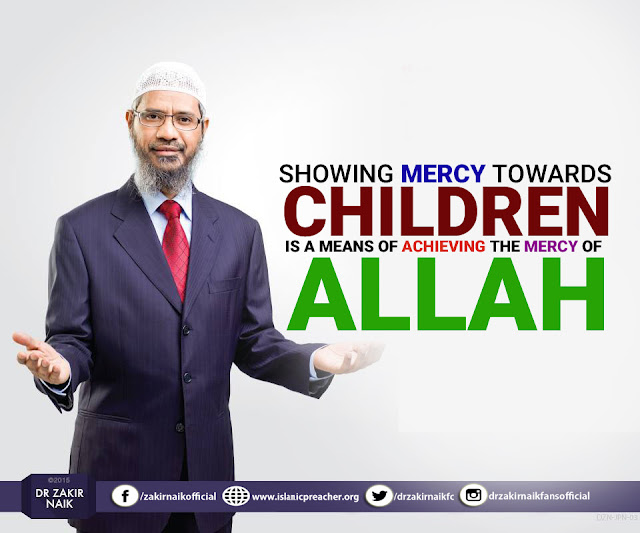 Aboo Hurayrah narrated that the Messenger of Allah, salallahu ‘alaihi wa salam, kissed Al-Hasan while Al-Aqra ibn Haabis at-Tameemee was sitting near him. A-Aqra said, “Indeed I have ten children and I have never kissed any of them.” The Messenger of Allah looked at him and said, “Whoever does not show mercy will not be shown mercy.” [Saheeh al-Bukhaari, 426/10]

Ihsaan in arabic means proficiency or excellence. Which means a person must attain the best manner to achieve a certain work with perfect sincerity. In Islaamic law, Al-Ihsaan is what the Prophet, salallahu ‘alaihi wa salam, has explained in his statement: “That you worship Allah as though you see Him, but since you are un able to see Him, then He most certainly sees you.”

A child can be shown mercy by kissing him.

Aa’ishah said that a Bedouin man came to the Prophet, salallahu ‘alaihi wa salam, and said, “You (people) kiss the children and we do not kiss them.” So the Prophet said, “Is there anything that I can do once Allah has removed mercy from your heart?” [Saheeh Al-Bukhari 426/10]

It means you have to show your love and show mercy on children and that is how they will learn love and mercy.

‘Umayr ibn Ishaaq said, “I was with Al-Hasan ibn ‘Alee when we met with Abu Hurayrah who said, “Show me where I might kiss you in the place where I saw the messenger of Allah kiss.” He replied, “Al-Qameesah” (shirt or upper garment), He said, “So he kissed the front of his stomach.” [Ahmed with a hasan chain]
From the types of mercy that can be shown to a child is carrying him while in prayer. Abu Qataadah said that the Prophet, salallahu ‘alaihi wa sallam, came out to us with Umaamah bint Abeel-‘Aas on his shoulders. Then he prayed. When he bowed, he placed her on the ground and when he rose from bowing, he lifted her back off the ground.” [Saheeh Al-Bukhaari]

On the authority of Abu Shaddaad, from his father, who said that the Prophet, salallahu ‘alaihi wa sallam, came out to us for one of the ‘ishaa prayers carrying Hasan and Husayn. The Messenger of Allah stepped forward and set them both down. Then he prayed and prostrated between their backs a single prostration that was lengthy. My (Abu Shaddaad’s) father said, ‘Then I raised my head and the child was on the back of the Messenger of Allah while he was prostrating. I then returned to my prostration.’ So once the Messenger of Allah had completed his prayer, the people said, ‘O Messenger of Allah, certainly you have prostrated between two backs in your prayer. Certainly the length of this prostration led us to believe that something had happened or that revelation had decended upon you.’ He, salallahu ‘alaihi wa sallam, said, ‘None of that occured, rather this child moved around me and I didn’t wish to disturb him until he had finished.’ [hadeeth collected in An-Nasaa’ee, authenticated by Shaykh Muqbil]

Indeed the Prophet Muhammad (peace be upon him) was the most merciful of all mankind. He was so kind with the children that he didn’t prefer to disturb them, because he was praying. His heart was so full of compassion and love. How many of us allow a child to be comfortable while we are doing some important stuff? We simply snap at the child and get over with it

There is so much to learn from the life of Prophet Muhammad ( peace be upon him).

From the types of mercy that can be shown to smaller children is playing with them: Umm Khaalid bint Khaalid ibn Sa’eed said, “I came to the Messenger of Allah, salallahu ‘alaihi wa sallam, along with my father and I was wearing a yellow shirt. The messenger of Allah said, ‘Sanah, sanah!’ (this means ‘good’ in the ethiopian langauge) Umm Khaalid further said, ‘Then I started playing with the seal of Prophethood. My father admonished me, but the Messenger of Allah said (to my father) ‘Leave her.’ The Messenger of Allah then addressed me saying, ‘Ablee wa akhliqee, thumma ablee wa akhliqee, thumma ablee wa akhliqee.’ (Trans. note: This phrase ‘ablee wa akhliqee’ is used by the arabs to supplicate for an extended life. Its meaning could be conveyed in the following expression: ‘May you live so long that your garments become worn and ragged.’) So she (Umm Khaalid) remained this way until (this supplication for her became actualized and subsequently) she would be mentioned by the people,” meaning that she would remain until her garments became old and ragged. [Saheeh Al-Bukhaari 425/10]

Mahmood ibn Ar-Rabee’ said, “I remember when I was a boy of Five years old, the Prophet, salallahu ‘alaihi wa sallam, took water from a bucket with his mouth (majjatan majjahaa) and threw it in my face.”

He (peace be upon him) used to be playful with children. The action of the Prophet, salallahu ‘alaihi wa sallam, with Mahmood was either from his play with him or it was a means of blessing him with it just as he used to do with the children of his companions.”

Anas ibn Maalik said, “Certainly the Prophet, salallahu ‘alaihi wa sallam, used to spend time with us to the extent that he even said to my young brother, ‘Oh father of ‘Umayr, what did the little birdie do?’ ” [Saheeh Al-Bukhaari 526/10]
Placing a child in ones lap also signifies the mercy towards children.

‘Usaamah ibn Zayd said that the Messenger of Allah, salallahu ‘alaihi wa sallam, used to take me and place me on his thigh and he would place al-Hasan ibn ‘Alee on his other thigh, then he would come close to us and say, “Oh Allah! Please be merciful to them, for indeed, I am merciful to them.” [Saheeh Al-Bukhaari 434/10]

Hence, these are some of the ways to be affectionate towards children. As long as your action does not bring about improper action or behavior.

May Allah bless us with mercy towards our fellow human beings.