Why You Should Not Pray Alone - Powerful Reminder 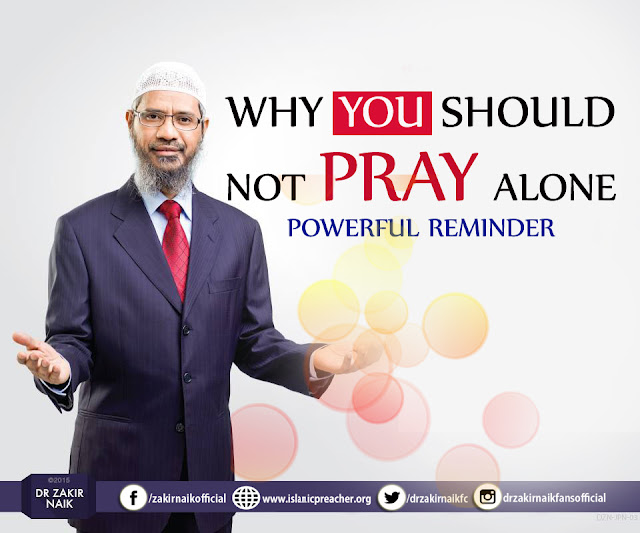 Be with those who are worshipping Allah and stay with them, don't separate yourself from them and be part of the Jama'ah (congregation).

Do you know what the reward is for praying in the congregation? Twenty-seven times more! Sometimes we say I won't pray right now, I will pray later. OK, there is a genuine reason and you have to go somewhere or you have to do something urgently, that's a different matter? but if for no reason you are saying yeah I can pray later, oh they take too long in the congregation, they take 10 minutes to pray, I can pray in 5 minutes in my home. Should we do that? NO, we should not do that because what are we losing out on? A LOT OF REWARD!

If you hear the call to prayer then you have to respond to it. Imagine he was a blind man, similarly from another Hadith in which Prophet (pbuh) saw a man who was praying alone by himself, perhaps he came late to the Masjid so he missed the jama'ah so he was praying by himself so the Prophet (pbuh) asked the people, who will give sadaqah (charity) to him? Who will give sadaqah to this man who is praying alone? What did he mean by that? He means who will pray with him so that he could increase in his reward so that his reward can be multiplied.

If you want to pray than avail that opportunity. Don't let it go by because on the day of judgment, you know what's gonna happen? We are gonna wish for the smallest of good deeds. We think i have enough and at least I am praying but on that day you will want more? Has it even happen with you that you go to the mall with your friend, you have a hundred dollars and your friend has two hundred dollars or something like that? and your friend ends up buying something that you cannot afford! Do you say it's ok? No, you want more. right? You will wish that you had brought more money. You wish that you had more money that you could buy more stuff, you could enjoy more.

May Allah guide us to straight path (Ameen).