WE CANNOT ATTRIBUTE ANY FORM OR GENDER TO HIM.THEN WHY ALLAH IS ALWAYS REFERRED TO AS… ‘ HE’? 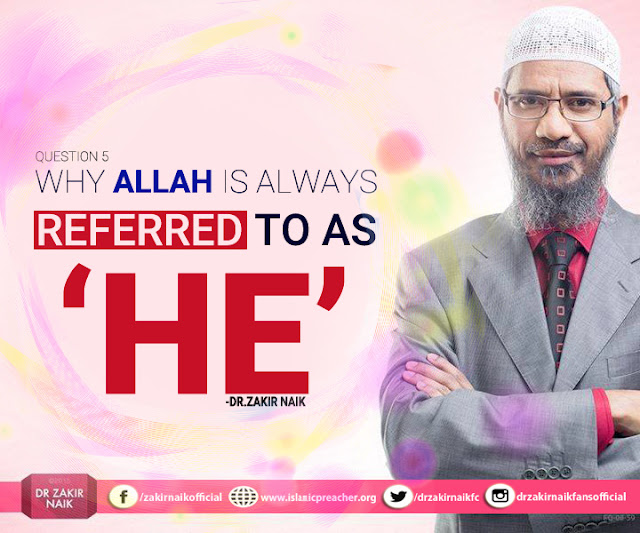 Q. (from slip) Assalamu Alaikum Br. Zakir. As Muslims, we believe that Allah Subhana Wa Taala is ‘Noor’- We cannot attribute any form or gender to Him. Why then, when we speak of Almighty God, or as written in the Holy Qur’an – Allah is always referred to as… ‘ He’?

A. (Dr Zakir): The sister has asked a very good question and this question has troubled me for several years. And she asked the question – Allah is Noor, He has got no form, no gender – So why is it written as ‘Hua’… as ‘He’. And this question, I asked to various people… you know in India and other scholars – but never got a satisfactory reply. Then I myself did a little research and then I checked it up with the experts.

That’s when I learned Arabic – The grammar… The Arabic grammar has got only two genders – Male and Female. English language, three genders – Male, Female, Neuter. So if you translate ‘Hua’ into English, it can translate as ‘he’ or as ‘it’ – Either ‘he’ or ‘it’ Same as ‘Heya’ -If you translate into English, it can be translated as ‘She’ or ‘It’. That’s The Arabic language… – two genders – English language … 3 genders. So ‘Hua’ if you translate, you can translate as ‘He’ or ‘it. ‘Heya’ as ‘She’ or ‘it’. So ‘Hua’ in English, if you say – Allah Subhana Wa Taala is beyond any gender – So why have they used ‘He’. Some people may say that if ‘Hua’ means ‘He’ and ‘It’, and ‘Heya’ means ‘She’ and ‘It’ – both means ‘It’.

So why did Allah use ‘Hua’ and not ‘Heya’. Because Qur’an says …(Arabic)…‘Say He is Allah one and only’. When I learned in grammar… in Arabic grammar, I was told, that in the Arabic grammar, there are certain rules and criteria for feminine gender… feminine gender, 1st, if it is feminine in nature like ‘mother’… ‘Ummun’, it becomes a feminine gender. 2nd rule – if it ends with ‘Toh’. ‘Toh’, – it is feminine gender… like Mirvahatun –fan ending with ‘toh’ it becomes feminine gender. Allah Subhana Wa Taala is not a female… So it can’t be feminine – It is not ending with ‘Toh’. Is it ending with ‘Toh?’ – No! So can’t be feminine. 3rd is – it should end with ‘Bada Alif’… then it becomes feminine. Allah doesn’t end with ‘Bada Alif’… So it can’t become feminine. And another one – if the pairs of the body – ‘twos’ like eyes… einum feminine, ‘Yadun’… hand, feminine. Allah is …(Arabic)… Say He is Allah One and only. ‘It is not fair… so, therefore, is defection, by default… since it can’t be used as ‘Heya’… ‘It’, that she ‘It’ – Allah uses ‘Hua’ ‘It’.

Otherwise, Allah Subhan Wa Taala has got no gender at all.